skip to main | skip to sidebar

George Will on Reagan and speaking -- just like Obama? 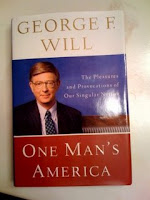 The following quotes (from George Wills new book) are well stated. He is praising the speaking strengths of a conservative (Ronald Reagan), strengths that a nation sorely needs. I can't help but think about Barrack Obama when I read these statements. Everyone agrees that Obama has a gift for uplifting and motivating the masses through his speeches. People tend to pile on and criticize this gift....the same gift that Ronald Reagan had, and which he used to inspire our nation. Our country needs some inspirational leadership. Great oratorical skills should not be criticized...we need them more than ever. Obama has the same speaking gift as Reagan, albeit in a different style. I hope he has a chance to use his gifts to lead our country. We need some inspirational leadership....George W. Bush is the anti-inspirational leader....we need something much new and different.

Our other web stuff